skip to main | skip to sidebar

Locked In A Cell Until She's Three 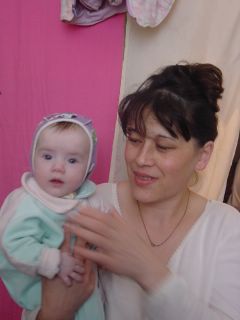 This baby is four months old. When she turns 3 years-old, she will be removed from the mother's arms and placed in an orphanage. The laws in Moldova are not much different than that of Greece. Women are often caught up in the vortex of their husband's alleged crimes. In reality, the psychology is that to reach the husband, arrest and detain the woman and children, in the hopes that the father will give himself up.
If you find this idea repugnant, you may recall the news article regarding the Greek government arresting the wife of a political person, in the hopes that her imprisonment would cause him to come forward. She was guilty of nothing!
I do not know the alleged crimes of any of these people. I don't need to know, I do not want to know. It makes no difference to me, whatsoever. They are God's children and deserve to be treated as humans. Always.

Father Bill Haymaker
I've been serving children in crisis for over twenty five years. My goals are not to raise money, but to find organisations and individuals who can help change lives! What may be outdated equipment for you could change the life of a child in Eastern Europe! To learn more please visit our site at: www.ProjectNewLife.org